The Future of Music

Harmonic Information as Medication for Education

The Classical Teaching Scope of Music

The Inner Mechanics of Creating Music

The Force-Fields in Music

The Purpose of
Music Tradition

Archetypical Career of the Classical Composer

The Natural Creation of Music by the Classical Composer


Peter Huebner – Harmonic Information as Medication for Education
Page 1 2 3 4 5
Nowadays, large educational publishers advertise with the claim that the customer can buy all the knowledge necessary for A levels in ten volumes or on a CD-ROM, and that he or she can also purchase all of the knowledge for each individual university discipline – accordingly, somewhat more voluminous – stored neat and tidily on a CD-ROM.

But the education experts do not recognise at all that – as far as the supposed “knowledge” is concerned – they are attaching only as much value to the brain of a pupil or student as the value of a piece of printed paper or a plastic disc. To put it more simply: Why can today’s pupil or student not just go to the examination board and simply show them the relevant books or CD-ROM’s? In this way everything would be far more perfectly presented than could possibly be conveyed verbally or with the examinee's own illustrations!

“For progressive learners today, rote learning and memorisation has already been taken over by the computer’s data and text store, and the meaningful combination of the two is effected by the relevant software programs.
Together, the two far exceed the achievements which a normal pupil, student, teacher or professor might be capable of today.”


Peter Huebner
The invention of the computer has lifted the lid on the madness of the conventional educational establishment, and it is predictable that, in the most advanced nations of the world, all knowledge that can be comprehended and stored by a computer will already soon be transferred to computers in the educational field too: that then, in the society of the future, it will only be a matter of educated people learning to handle computer data successfully – without putting undue strain on his brain and without wasting his time with unnecessary rote-learning processes.

Music & Nature: And this is not such an off-beat logic – today a large proportion of the successful learning process has already transferred, with the help of computers, from the school method to this educational mechanism.

Peter Huebner: And if developments continue at the speed they have so far, and if educational experts continue to remain as backward as ever, then this successful, achievement-orientated, scientific and technically-supported educational market will have overtaken and outbid the schools, colleges and universities – especially the state-run ones – faster than those responsible there are even able to follow this line of thinking.

Music & Nature: This particularly affects the conventional educational market, where it is mostly a case of rote learning and retention of the most diverse information, and the meaningful combination of the two.

Peter Huebner: For progressive learners today, rote learning and memorisation has already been taken over by the computer’s data and text store, and the meaningful combination of the two is effected by the relevant software programs.
Together, the two far exceed the achievements which a normal pupil, student, teacher or professor might be capable of today.

“In view of the new educational and vocational demands cited, we are concerned with increasing human thought capability.

This will make it possible for pupils and students, working together with modern scientific and technical educational means within the framework of everincreasing international competition, to increase achievement across the board in the future.”


Peter Huebner
As such, the conventional teaching and learning establishment of schools and universities survive only by virtue of the fact that they are regulated by the state, and if today this kind of education was passed into the hands of private enterprise, then computers and their programs would have made the running in education.

Music & Nature: Would have won!

There is, however, a large area in education which has not yet been specifically included by so-called conventional education, and which is nevertheless of enormous significance, particularly in view of those developments which are to be expected in education in the future.

In my opinion, this concerns the entire area of the so-called human learning capabilities, those features which, so far, have been taken for granted in conventional education, but which have been completely ignored as independent educational disciplines.

The computer age has revealed that, in focused use of the computer and the educational contents that have been entered into it, and in the logical combination of the two, the ability to think plays an enormous role.

The pupil, student and educationalist of the future, as well as anyone involved in future work processes, will primarily be distinguished from his colleagues in terms of the extent to which he is able to make use of this new educational machinery.

Since some time our work in the Micro Music Laboratories® is now concentrating on these capabilities.
In view of the new educational and vocational demands cited, we are concerned with increasing human thought capability. This will make it possible for pupils and students, working together with modern scientific and technical educational means within the framework of ever-increasing international competition, to increase achievement across the board in the future.

Music & Nature: But that alone is not enough for us. Today’s diverse individual social and ecological crises show us that there is still a fundamental shortfall in terms of thinking, which is not concerned with coping with scientific and technical devices, but with the aspect of the naturalness or unnaturalness of the thinking.

And Socrates later confirmed Pythagoras’s claims, but pointed out that the human soul was also aligned to these natural laws of harmony and that the health of the soul at this most inner level of life was just as dependent on the function of the natural laws of harmony, as on the function of the physiology on its material level. 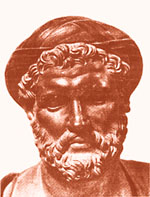 physician,
musicologist,
mathematician,
founder of our
scientific age
he created the
pre-conditions
for utilising
harmonically
structured music
of medicine.
Whilst Pythagoras was primarily concerned with researching the laws of harmony of the microcosm of music in order to maintain peoples' physiological health – he was also a renowned physician –, Socrates pointed, above all, towards concentrating on the health of the soul, since, for him, the harmony of the individual’s soul was the natural basis for the harmony of the social community.

In my opinion, in modern medicine the undesired side-effects of the medications stem from a failure to respect the universal natural laws of harmony when producing and applying these preparations. I pointed this out in my pharmaceutics interview and spoke in detail about it.

But we are also familiar with a whole series of undesired side-effects arising from conventional education, to the extent that supposedly educated people can become murderers, commit suicide, indeed become criminals of every kind, right down to unscrupulous polluters of the environment. But they can also become addicts and professional failures, war heroes and martyrs etc., etc....
>>
<<
With kind permission of AAR EDITION INTERNATIONAL
© 1998 –  MICRO MUSIC LABORATORIES